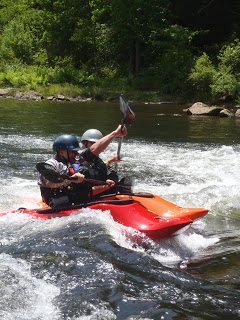 The Chattooga 3.5 trip co-lead by Samantha and Jeremy Thompson and myself was just one of those perfect days on the river. What makes this trip stand out amongst countless other 3.5 trips? Group dynamics, I think. We had t

he best group: Tom Bishop, Pauline Thynne, Richard Salenfriend, David Wood, and of course, Sam, Jeremy and I. This trip started off with a Chinese fire drill: Jeremy wanted to try out my All-Star, and I decided to hop into his Villain. David Wood was also trying out his new playboat, a Project X. As we headed down the river, the trip sort of became a free playboating clinic, thanks to our two more experienced paddlers, Tom Bishop and Pauline Thynne. Jeremy went from being somewhat unsure of his feelings for the All Star to doing stern squirts with Tom, Pauline, and David within the first hour. We also had a really fun photo shoot at the little surfing wave above Eightball, trying to get that perfect photo of Tom and Pauline surfing the same wave. It took several tries, but we finally got them both on the wave and smiling at the same time!

Almost… but not quite!

As the trip progressed, I quickly realized that I could do no wrong in the Villain and spent an absurd amount of time on the eddyline at Bull Sluice, contemplating Double Drop. In the end, I had given it too much thought and snuck down single drop. Speaking of Bull Sluice, Sam had already partially portaged it, when she decided to run the entrance for the first time and actually carried her boat back up to the top! She had a beautiful first full run of the Bull!

Pauline shows us the line at Bull Sluice.

Sam and I were fired up after Bull Sluice and tried Jeremy’s favorite boof a little further down the river. I was having a great day and also tried a different line at Rock Jumble. Richard Salenfriend played a great practical joke on us: he missed every roll he tried in an eddy, but then flipped at Surfers and executed a flawless combat roll! He also had a great line down Woodall. It was a perfect day!