(Above)Roger on Dicks Creek near Dahlonega 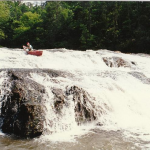 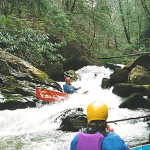 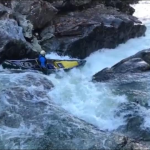 Harvey Wallbanger on Chattooga Section I 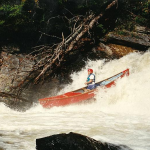 “I joined GCA in the Spring of 1974, have been on the Board since November 1978 when I was appointed Exploration Chairman, was President in 1981-3, and was awarded an honorary life membership in 1986.” — Roger Nott
If you have been a GCA member for any length of time you may have noticed a man skillfully paddling a weathered, green, sixteen-foot Royalex Buffalo Canoe.  He is known to be able to paddle a “Blade of Grass and the Morning Dew”.  This love and lifestyle of paddling began at summer camp in 1953 with a wood canvas Open Canoe.  His contributions and accolades include:

The GCA is proud to present to Roger Nott the distinguished Lifetime Contributor Award.  A paddle of honor will be presented as a symbol of our gratitude for your dedication and commitment. Thank you, Sir!