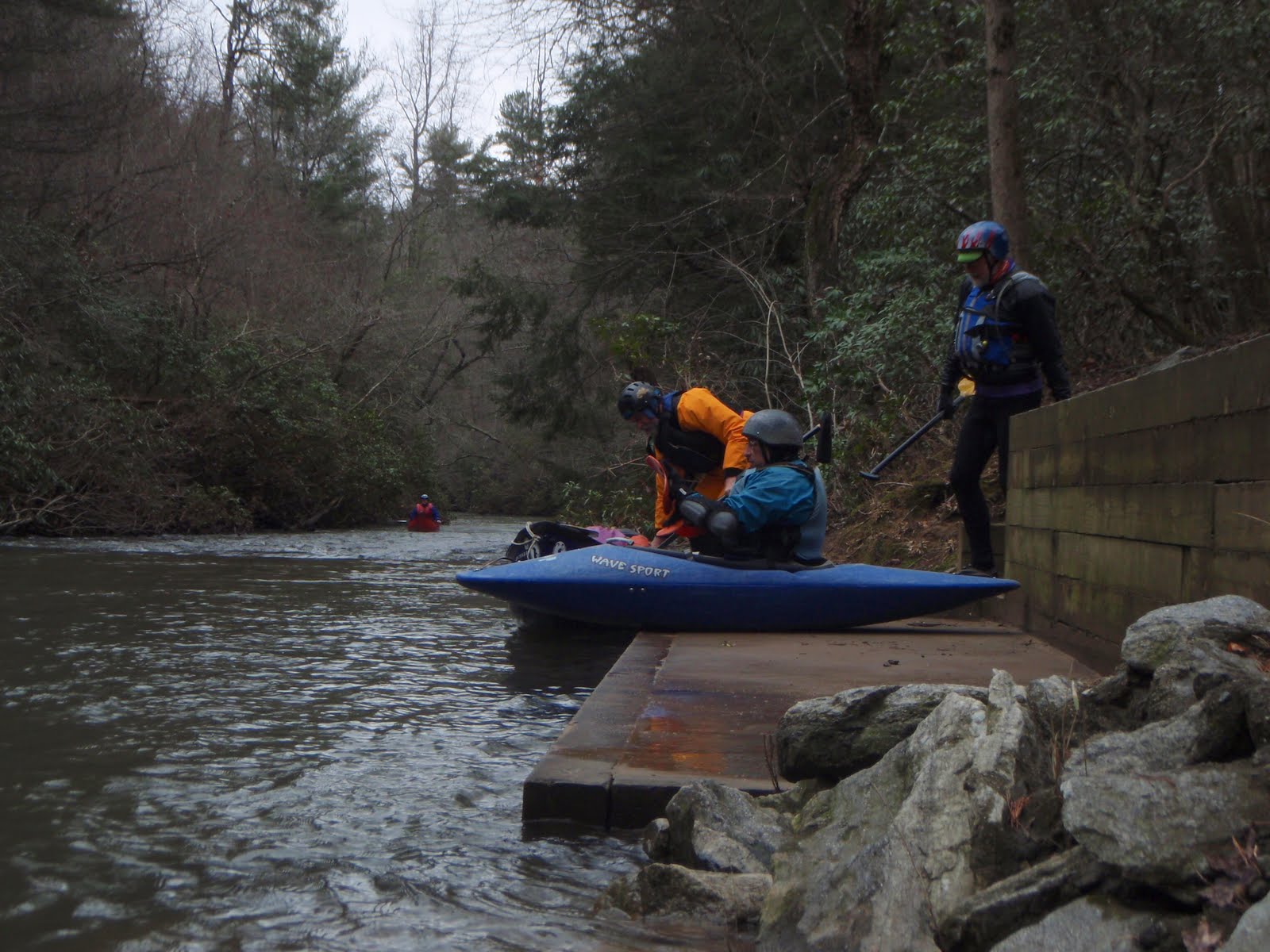 Upper
Amicalola II-III, DNR Campground to the 53 Bridge ( Between Jasper
and Dawsonville, Ga )

This
run is about as pristine as they come. The put-in is just a few miles
below Amicalola Falls and the head waters are mostly in the Dawson
County Forrest. The banks are lined with mountain laurel and in about
a month the river will become a flower lined arbor. Take a hike from
the take-out down a board walk a quarter mile to Edge of the World
rapid, one of the more spectacular places in the state.

I
said late winter because it was cloudy, the air was cold (low 40s )
and the water was even colder. The 7.7 mile run is listed as a
trained beginner run, but the veterans on the trip agreed that the
run that day, weather and level (1.4′ internet/ 1.1′ bridge gage ),
was more suited to intermediates.

We
met at the 53 bridge around 11:00 am, left dry clothes at the
take-out (my preferred winter routine), and headed to the put-in. The
put-in is at the DNR Campground on Amicalola Church Road (Right at
the first intersection heading back West on 53, with a store and
Cowart Rd on the left). We
ran into a huge river wide tree about a mile from the put-in. The
open boaters assisted most over the low end on river right, as a
couple of us kayakers scrambled around the high end on river left.
There`s some spots for seal launches a little ways down on the left,
but we opted for warmer & dryer.

After
a few small rapids and some surf waves we came to the ledges section
at about mile 3.0. The group of eight paddlers was led by a veteran
group of 4 open boaters, with Dorothy Vezzetti from Big Canoe taking
the lead. The first drop is called The Ledge.

The
line here was to run just to the left of the dry section of ledge (on
the right side of the river), going from left to right, to avoid the
hydraulic that develops at the base of the drop at higher levels. [ Steve Cramer
sits in the target eddy below the drop. by Lisa Haskell ]

On
the second ledge, Dorothy deftly led us through a mogul course on the
right side of the river, that eventually comes back to the left.
There is a straight center ledge drop here, of about 3′, but you tend
to bang into more rocks.

After
the ledges we took a quick, cold, lunch break on a small rock
outcropping a little ways down on river right and warmed back
paddling the flat water to the Steel Bridge. After
the Steel Bridge there is more flatwater. After
the Steel Bridge the rapids on the last 2.3 miles run are pretty much
‘read and run’. The first one, you can come in on the right and eddy
hop down, or come in center left of the rock and angle right. The
next two rapids are shoals type rapids where you can come in and eddy
out on the left, to get a good look, then head on down. On the first
one, you`ll need to get back to the center or center right to ‘stay
off the rocks’. On the second one, you need to stay left at the
beginning to ‘stay off the rocks’.

The
last rapid is the play wave at the take-out.

“…there
is nothing — absolute nothing — half so much worth
doing as simply messing about in boats.”  From The
Wind in the Willows by Kenneth Grahame.