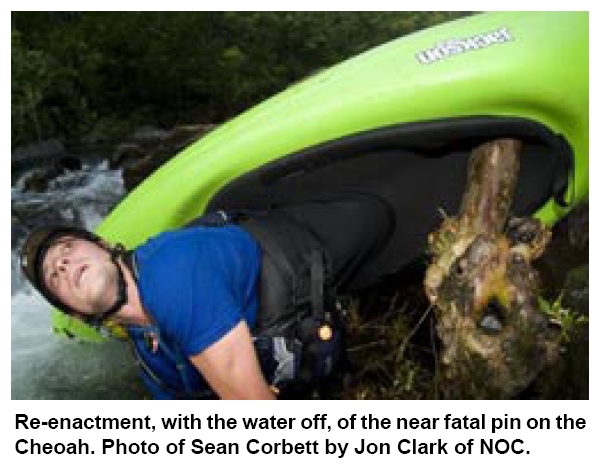 Two
recent incidents on the Cheoah serve as a reminder of the risks
presented by woody debris, especially in fast flowing, dam-fed
streams. In April, a paddler drowned on the Cheoah when her shorts
snagged on an underwater branch. (Eddy Line, June, 2007.)

More
recently, a student paddler at NOC had to be rescued when his kayak
overturned onto the stump of a felled tree, pinning his skirt and his
leg. (A detailed report of the incident, and of a re-enactment of it
with the dam not running, is at NOC Paddling School – scroll to Tuesday, August 14.)

One
issue brought to light by these incidents is largely limited to the
Cheoah. The organized, large-scale removal of woody debris from the
long-dry riverbed before the flow was resumed may have resulted in
some of that debris being more dangerous rather than less so. Before
you cut back woody debris, think about not only the danger it
presents now, but also the danger it will present afterward. A
standing tree is a serious but obvious danger: the stump of a felled
tree may well be a deadly and hidden danger, especially if the
cutting leaves it sharp and it is just below a rapid or pour over.

The
other issue brought to light by the Cheoah incidents is more general:
when it comes to woody debris, lower water can mean higher danger. A
river is not the same place at very low levels as it is at normal
flow. Stumps, rocks and other objects that are in deep water at
normal flow can become hazards at lower levels. And shallow areas at
normal flow may become places to get stuck at lower level- not a good
thing if you’re the first of several boats in line.

This
particular danger isn’t limited to rivers. The drought has resulted
in incidents of boats hitting trees or other underwater features on
Lake Lanier and Lake Allatoona, and I can see newly exposed when I
cross the bridge over Lake Lanier. Paddlers on West Point Lake always
need to be alert for tree tops.

Be careful out there. Take
your time and scout the places where you can’t see in advance the
stumps and rocks you usually just glide over.

by
Rick Bellows
From The Eddy Line, September 2007