At the GCA Spring Extravaganza, a group of 28 canoe and kayaks took off for the Tuckaseegee river. None of our group had ever paddled the new rapid created by the removal of the dam last year.. Most were enthusiastic about the idea until we got there and scouted it. As with most pictures of rapids, it is MUCH bigger in person and even bigger when your canoe or kayak is in the water.

James at Tuckaseegee Outfitters told us that he had been advising his duckie rentals to take the far right line. Several in our group opted to portage on river left.

Those that ran the rapid ran the far right line that is marked in red. Immediately after the drop there is a curler wave that throws the canoe and kayaks back hard to the left. The combination of rocks and eddylines that follows this curler wave caused lots of swimmers in our group. Several people in our group reported seeing rebar (steel rods) in the rapid.

The line marked in yellow also seems very possible, but nobody in our group tried it. 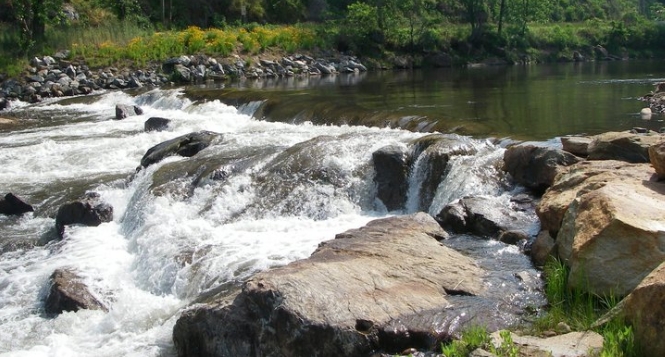 Comparing this picture from river left to the river right picture helps give a better idea of the vertical drop and size of the rapid.

The rapid is easily the hardest river on this section of the Tuckaseegee river. It is easier than Nanthala Falls, but more difficult than Horseshoe on the Upper Chattahoochee, Clear Creek or Stegal Mill on the Cartecay. The rocky nature of the rapid makes swims more punishing.