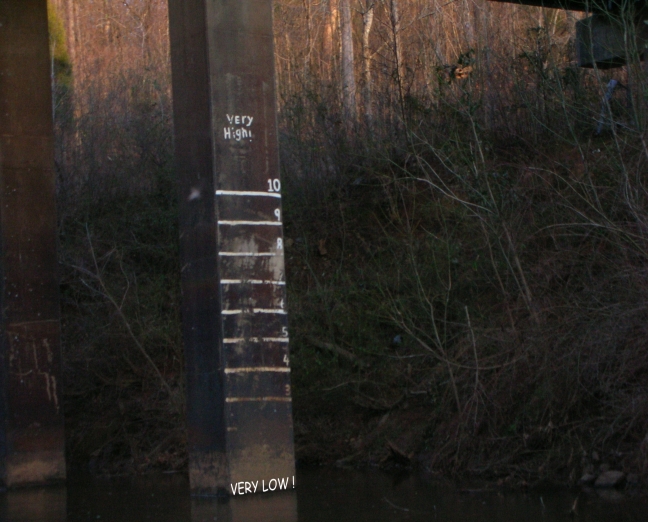 There was also a paddler with a new tandem flat water canoe she had never paddled. (We were fortunate to have this paddler and boat along as we will explain later.) Most of us put in below the first Class 3(?) rapid, but John H. and Vincent P. could not resist playing for several minutes. We got on the water about 10:30 for what we thought would be a leisurely 5 hour paddle. Unfortunately, we soon learned that since Buddy and I paddled this section with our friends in the Georgia Wilderness Society a couple of years back, someone had evidently placed many rock ledges in the river, making for a very challenging paddle. It seemed that they did an excellent job of building these rapids so that all required turns and drops have rocks just under the surface so that even if you were a good experienced paddler, it was virtually impossible not to get stuck on the rocks.

Keep in mind that about half of us were in sea kayaks, rec kayaks or flat water canoes and many had not been in rapids before. However with Jamie H., Vincent P. and myself climbing over rocks and pushing, pulling, and helping the paddlers, we were able to get down the river. (I am sure these rapids were not in this river two years ago,.or could it be my memory. Perhaps Mad Cow disease.) We had one paddler challenge a bad strainer but Robert O. and Jamie were able to make a successful rescue. We also had a paddler become ill but we were able to transfer the paddler to the tandem canoe that I mentioned earlier. We had managed to stretch a planed 5 hour trip into about 7 hours but surprisingly, everyone was in a good mood and said they enjoyed the paddle. (I was relieved because it would not have surprised me if they tied me to a tree and given me a few lashes). About half of us retired to Buckners Restaurant and had a fabulous meal. Life is good!