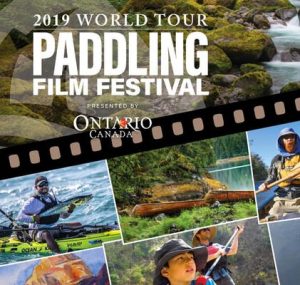 Since 2006, the Paddling Film Festival World Tour has been showcasing the very best paddling films. The World Tour screens in more than 120 cities around the world. Join us for this year’s best paddling films. You’ll be inspired to explore rivers, lakes and oceans, push extremes, embrace the paddling lifestyle and appreciate the wild places. Since Rapid Media launched the festival back in 2006, the World Tour has screened 959 times to more than 282,864 audience members. Rapid Media has awarded $71,000 to paddling filmmakers and helped raise tens of thousands of dollars for charitable causes. The Paddling Film Festival World Tour has grown to become one of the largest paddling events in the world.

Like last year the Georgia Canoeing Association wants to support the Paddling Film Festival and encourage our members to attend this event. Therefore we are offering a great deal to our members – buy one ticket, get one free! When you purchase one ticket for $25 you will actually receive two tickets (a $50 value). You will receive your PayPal receipt and then pick your tickets up at the event. You cannot get one ticket for half price but for each $25 ticket you purchase you will receive another ticket free.