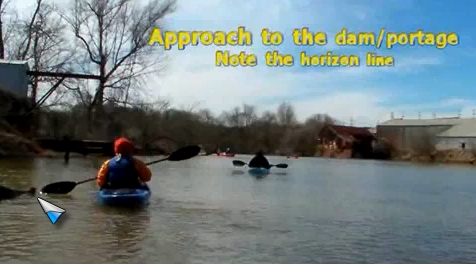 On
February 27, several paddlers we braved the early morning temps of
low 40s to canoe and kayak the Etowah River. We put in just below
Lake Allatoona Dam and took out 9.8 miles downstream in Cartersville.
Our trip coordinator was Vincent Payne.

The
day was sunny, but windy and the temps did rise to the low 50s. My
hands were frozen when I first got on the river, but I warmed up as I
started to paddle. The river normally runs very clear, but the recent
rains had turned the river brown.

The first 3 miles are a lake
that is formed by the Thompson Weinman Dam. The dam was built in the
early 1900s and was the first power plant to generate electricity for
Cartersville. In the late 1900s, the generation was stopped and this
low head dam is now a relic to a time gone by.

At around mile
2, we came across the remnants of an old rail road dam. I did a
little research and the remaining stone pilings are what is left of
the Western and Atlantic Rail Road bridge. During the Civil War, the
bridge was burned down and re-built 6 times by confederate and
northern troops. The rail road bridge was key in getting supplies to
the both Armies during the Battle of Atlanta. 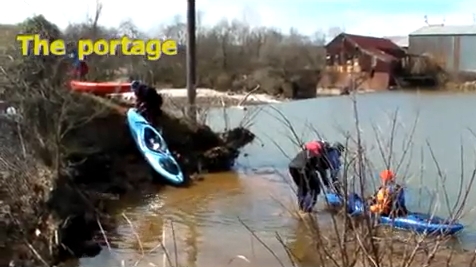 Once at the low
head dam, we began our portage. The noise from the tumbling water
over the dam is surprisingly quiet and you can portage just 20 feet
or so from the lip of the dam. However, when the Corps Lake Allatoona
dam is generating, the seemingly benign low head dam can turn fierce
and you must portage much further back from the dam. After the manual
labor of hauling boats and equipment around the dam, we decided to go
ahead and eat lunch. 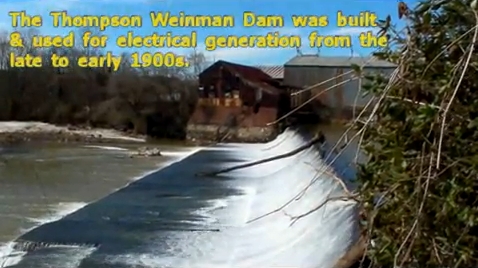 The river below the dam is pretty flat
with only occasional riffles formed by Native American fish weirs.
Around mile 5, we passed the Etowah Mound State Park. The state park
is home to 6 mounds from the Mississippian Native Americans that date
back to 1000 – 1500 A.D. During warmer months, this is a nice place
to cool off and swim.

In the video, you will see a great blue
heron. This bird must be someone’s pet because it allowed me to get
maybe 15 feet from him. As I was shooting video, he sat there and
simply stared at me. Before editing, the video was close to 3 minutes
long. When it finally got fed up with my annoying presence, he gave
to flight and landed across the river.

The Etowah has become
much more developed since the last time I paddled it about 4 years
ago. With development has come erosion control walls and ugly rip rap
along the banks of the river. The river is no longer as pristine as I
once remembered, but it is still very interesting and laced with
history.