A tragic kayak accident on the Tellico starts 2011 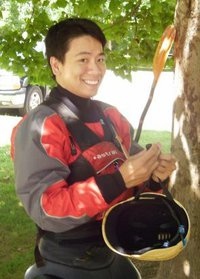 Saturday, January 1, 2011, GCA member Paul Pichanusakorn passed away after a kayaking accident on the Tellico River.

There will be a memorial service on Saturday, January 8th at 2 pm, at the H.M. Patterson & Son Canton Hill Chapel in Marietta, GA. Details of the service will be updated shortly on the website http://www.hmpattersoncantonhill.com/. The service is open to all friends.

From Gavin Fay:
This is my account of the events that happened on January 1, 2011 at First Ledge-Tellico River. I was involved in the rescue efforts but not in the actual CPR.

Driving up River Road on the way to the put in Rob Strangia and myself observed the level on the Tellico and deemed it a a perfect level as we saw it.  Upon reaching the river put in we saw two other paddlers waiting there.  During an introduction Rob and I find out the paddlers are Bill Allen and Paul Pichanusakorn.  Prior to this day I had never met or paddled with either Bill or Paul.  Bill and Paul are waiting to meet up with another paddler Bartosz Ilkowski.  When Bartosz shows up all 5 of us start suiting up and making our way down to the river put in.  After we put on there was about 10 minutes of warm up and paddling around before we headed out.

I was the first in our group, and as we headed under the River Rd bridge I noticed there was a decent amount of water in the river already.  As I approached 1st Ledge I paddled really hard over the drop and made  clean run.  As I got to the bottom I remember looking over my shoulder to see how everyone else was doing.  I saw Bill and Bartosz behind me, but then noticed that Paul and Rob were stuck in the hydraulic at 1st Ledge.  I observed the situation for a few seconds from my kayak then realized the guy’s might be in real trouble.  So I quickly fought the current to a small upstream eddy on river left, the road side.  I climbed out and grabbed my throw rope and started my scramble up the river bank.  Now at this point I could still see Rob very clearly fighting in the hydraulic, and I thought I saw Paul fighting as well?  As I worked up the steep and slippery bank I saw that Rob managed to get himself free.  He floated down downstream to a mid river rock maybe 20-30 feet from the hydraulic.  I realized Rob was clear and safe so now I kept looking for Paul.  I was still probably 60-75 feet away from Paul’s location in the hydraulic.  I did not see him in the hydraulic so I thought maybe he got free and floated down during the mayhem.  As I looked downstream I did not see Paul in the water or near the banks.  I continued to scan the rapid for any sign of him.

Finally I saw a glimpse of orange, but it appeared to be behind the curtain of water coming over the drop.  A few seconds later I saw Paul float up and out and he was face down still stuck in the hydraulic. I quickly realized he was unconscious.  I began yelling to Rob who at this point turned around on the rock he was on and noticed Paul as well.   Rob threw a rope to Paul since he was the closest to him but to no avail since he was unconscious.  Paul finally floated free and went down river where Bill and Bartosz were waiting to intercept him to get him to shore.  I ran back to my kayak got in headed down stream where I saw Bill and Bartosz administering CPR.  Rob had safely swam over to the river left bank.